Last Painting of the Long Weekend

I just finished up with the last large sheet of my Canson watercolor paper on Sunday--beautiful day.  I brought it in to my wall so I could live with it and make final adjustments and reworked it for a couple of days.  So this would the the tenth, so I guess it's Ecstatic Off The Wall X.  This is the series that involved taping onto the door of my garage, and doing a gouache vertically, allowing the paint to run a bit.


I wanted to record the process on this one so I took state photos, as I am doing a lot more layering than I have ever done before (successfully anyway) with gouache.  It seems very ordered in retrospect, but it was actually planned as I went along, and I didn't know exactly where I  was headed.


Somehow I pressed the wrong button or something, so I missed getting the underpainting.  The underpainting contributed to making the white much richer and more complex, yet only slightly different from the original white of the paper.


So the first photo is fairly well along, you can see the orange and green rhythms partly blocked out: 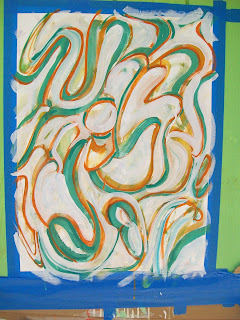 State 1
(You can see how the paper is mounted with blue painter's tape against the chartreuse shed door.  There's a large sheet of cardboard underneath to catch the drips.)
Now I lay in some outlines in charcoal to suggest locations for the next color, which will be a lavender. 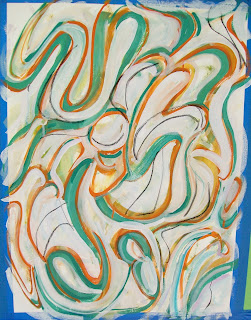 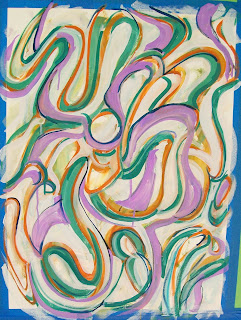 State 3
The lavender was getting too dominant.  I wanted to keep a balance between the secondary colors. at first glance, the painting looks about the same, but you will notice that I pulled in more oranges. 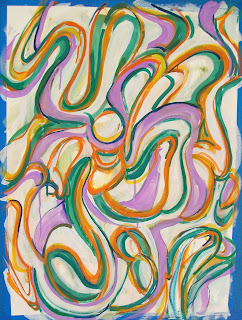 State 4
I dialed back the positive forms somewhat bringing in more white.... 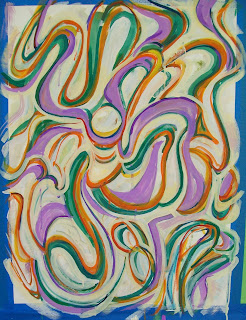 State 5
OK kid, now the rubber meets the road.  The theme is set, there's just a bunch of junk that interferes.  Wipe it out!  Thank goodness I bought all that white!  And I just found out I have to leave sooner than I thought.  Quick now, rough in the start of the new forms for the lower right.... 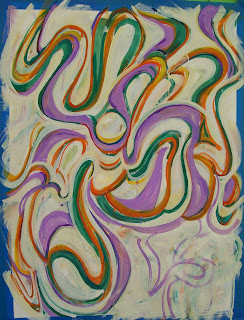 State 6
At this point, I was satisfied that the painting had its basic character.  I knew I wanted to refine it but only slightly.  I signed it--to let myself know that I should stop messing with it. And let it incubate. State 7
I incubate by pinning it to my bedroom wall and stare at it, looking for tiny areas that need adjustment... ...and as I come in and out grabbing a little tiny bit of paint to refine the curves and rhythms bit by bit, I get to spend a lot of time with it and see it under different lighting conditions in the morning and night....
...sometimes this process goes on for a month on a painting that originally took only an hour or two...
This one I knew what to do pretty fast... did a little painting at night...a couple of days... 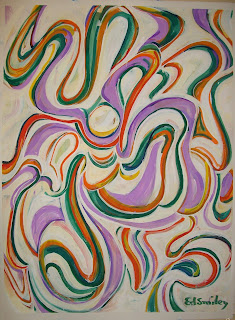