He's always an interesting read. I remember watching a video of Willem de Kooning painting. He would go to a chair, sit back and Look as if his eyes were boring though the canvas. I think that artists, need, above all to Look.
Posted by Ed Smiley at 3:01 PM No comments:

MoMA | Abstract Expressionist New York
This sounds like a great show/
Posted by Ed Smiley at 10:09 PM No comments:

“All that is gold does not glitter, not all those who wander are lost; the old that is strong does not wither, deep roots are not reached by the frost. From the ashes a fire shall be woken, a light from the shadows shall spring; renenwed shall be blade that was broken, the crownless again shall be king.”--J.R.R. Tolkien


Being Lost can mean many things.  It can mean being trapped and unable to proceed.  Or it can be a voyage of discovery, of openness.


Since I paint outside, this weekend was rotten, because it has been raining.  So I decided to do some non-painting painting, as it were.  About 25 years ago I used to do collage and color xerography, and would sometimes move pieces as they were being scanned to create interesting effects.  (Sadly, the three color pass copiers are a thing of the past so you can't get the interesting out of register effects you used to be able to get.)


It suddenly hit me that with some newer technology, namely an HP Photosmart printer/copier/scanner, I could easily transfer similar effects to paintings by combining them with acrylic transfer.  I had been curious about trying acrylic transfer, but I wasn't really interested in doing it with recognizable imagery.


I tried an experiment with wiggling a colored image (the cover of a phone book, actually) to get the kind of gyration or rhythms that I am using in painting, and I got some painterly watery effects.  I liked what I saw, in some cases made multiple copies and then cutting out parts, covered them with Golden tar gel, flipping them over and rubbing them to get good adhesion, pasted them onto a primed canvas.


I had prepared this canvas with an underpainting of Liquitex clear gesso mixed with a tint of phalo green about a month ago. There's a point where you can start peeling the paper, and then, when dry rub off the little bit of paper left off the canvas.


Anyway, I am going to be adding traditional acrylic painting to it and unify the parts, but I don't really know where I am going with this. 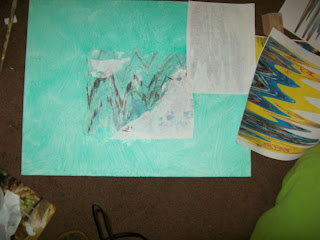 The canvas, with the first piece applied and partly removed. 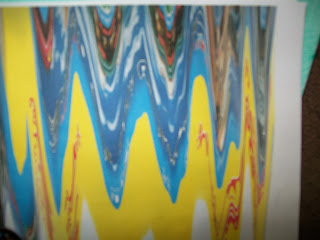 One of the "paintings" I did by moving during the scan.  I made several copies. 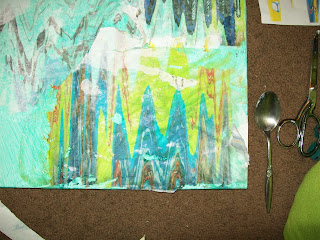 Cutting out pieces. Adhering passages.  Covering with another sheet of paper.Rubbing with spoon.  Trick I figured out is is to have a book underneath exactly as thick as the stretcher bars are deep so the rubbing doesn't make the canvas sag. 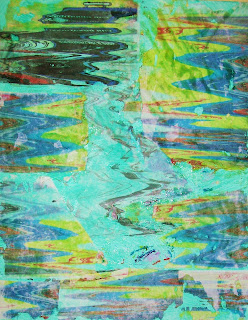 This is a pretty early state still, I haven't removed all the paper yet, so the colors appear muted in parts.  I don't know where I am with this, but some pretty exciting things seem to be happening....
Cleaning it up a bit... 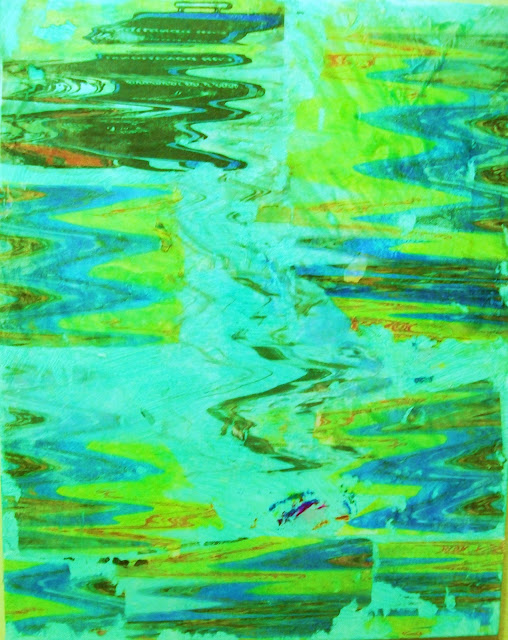 Here's after removing as much paper as I could, leaving the color embedded in the dried clear Golden tar gel layer. I then coated with clear Golden tar gel, sanded it down, and then put an even coat of Liquitex gesso (I actually was going to do something different, I grabbed the wrong bottle, but I decided to try it, after I poured it on!)