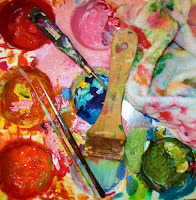 Sometimes it is not good to get too complacent.

I am generally making paintings by preparing a colored acrylic ground, making altered images digitally and through xerography, transferring the image into acrylic gel, removing the paper and then painting into the basic image.

And that approach has certainly not been exhausted, and I am finding new ways to experiment with it.

For example, taking photos of already processed images and then processing them. Taking two pairs of left/right images and then creating a fourfold symmetry.  These were transferred over a light blue ground.

You can see the results below.  I enjoyed doing it, although it was I added some painterly touches, and the transfer process introduced some irregularities, as it was just too symmetrical. 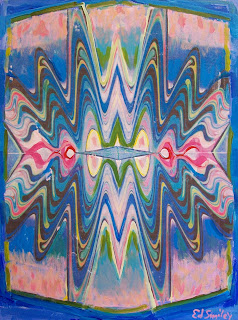 Odd, right after I finished this painting, in a strange synchonicity, I just picked up an old copy of the Magic Mirror of M.C. Escher for a buch from a garage sale across the street.  Escher was someone who sometimes seemed to be almost too symmetrical....


Again, this one was a problem child.  I had laid in a ground color an placed an image that was somewhat dark in the center, except it turned out to be set in off center.

I did many layers of different desperate things, like covering the outside part with many different small touches of different colors, then glazing and then doing it again , then adding tooth with transparent gesso and scribbling in pencil, then more layers, then masking off with painter's tape and adding two orange stripes.  I set it aside for a couple of weeks.

Finally I added rough stripes in cadmium yellow and added more intense blue to the outside, and then added  some vigorous brushstrokes to attempt to tie it all together.  I found that I was not too dissatisfied with it. 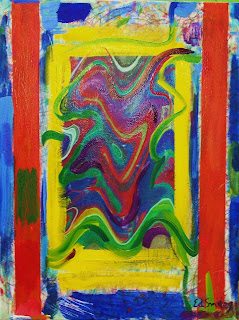 Sometimes it is good to get yourself into a pickle like that.

I decided to switch around my process a bit.  Instead of toning my canvas, I started with drawing directly into the primed canvas in charcoal, and fixed it. 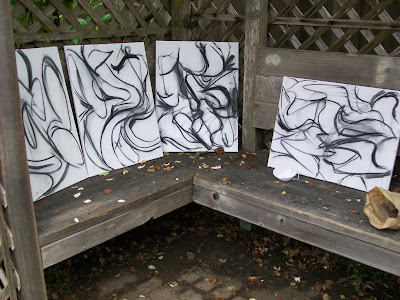 Then I did several different techniques.  I painted into them some.  I used one technique where I use pieces of used paper palettes to transfer acrylic skins to layer over the drawing.  I also used layers of xerox transfer, and also transferred newspaper,  Here's a couple of photos of what they look like, still in process: 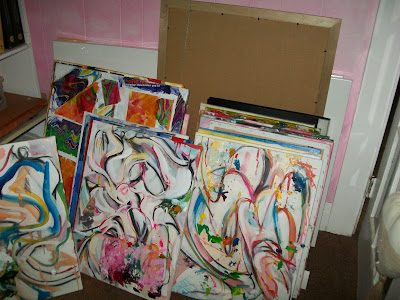 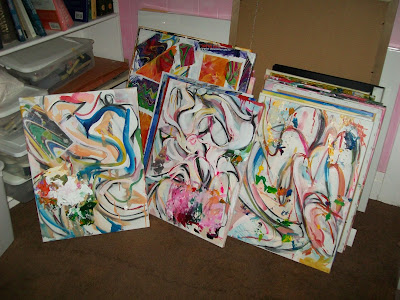 I think of that quote towards, the end of Pleasantville:
"What's going to happen next?"
"I have no idea."