de Kooning: An American Master by Mark Stevens
My rating: 5 of 5 stars

This autobiography deservedly netted a lot of book awards, including the Pulitzer. I'm going to do a fairly detailed review, but it only scratches the surface of this book, and is no substitute for reading it.

There was a major de Kooning retrospective at MOMA in 2011-2012 with 200 works, around the time this book was released:
http://www.moma.org/interactives/exhibit...

I won't label it a spoiler, because there is so much I left out, but if you hate knowing anything about a book, then you might want to stop here....

The book extensively details his Dutch background, both his troubled home life--with an abusive mother--and his short but thorough grounding in academic drawing, leading to early success in commercial art and as a chief artist in Dutch design firms.

A highly intelligent child with early signs of some degree of artistic ability, a marketable skill was the one way out of the bottom rung of the highly stratified Dutch class system, where working class children were expected to leave school at the age of twelve, no matter how promising they were. (In reading the recent van Gogh biography,Van Gogh, at the same time, I was struck by how little the insular and regimented Dutch society had changed; it is after World War II, apparently that the great movement towards a more enlightened and progressive Dutch society emerged.)

At first, he never thought of himself as a fine artist, but as a commercial and decorative painter, who privately painted for himself (at that point in a somewhat symbolist or Art Nouveau manner) --ambitions and expectations that he carried on into his journey as a stowaway to America. Early on, he exhibited a somewhat American entrepreneurial spirit, and preferred to move from working for established companies to freelancing.

This background helps in understanding many aspects of his later career. His training at the Academy had not included the more advanced classes in perspective, nor painting.

Perspective was not particularly an issue for the shallow space used in magazine illustration or commercial advertising, nor when developing his own style in a modern or abstract idiom, based on a flat sort of Cubist type space.

He was never interested in vast battle scenes or complex architectural views. Nonetheless, he seemed to exhibit early on a deep seated need for self-contradiction or paradox, by sticking difficult foreshortening into straightforward abstracted figuration, punching and flattening space into a worried surface that defied a single reading.

His training in painting came from commercial firms, and gave him practical experience in many ways that he might not have had an opportunity to learn at the academy, including shortcuts in layout, and preparation of paint. In painting, he utilized a lot of techniques that he had learned as a commercial illustrator in innovative ways in fine art, in terms of layout, transfer of images, and manipulation of materials in his paintings. He developed an art practice of using vellum-tracing paper- to cut up and transfer shapes, and even lift paint from painting to painting.

At one point in his life, he decided to stop doing commercial art and paint full time. This was a risky and conscious choice and one that his free lancing personality was willing to accept, to spend a long time, "broke but not poor", as he put it himself. Luckily, New York turned out to become the kind of art world crucible for the emergence of a new kind of painting, and interaction with other artists on the cutting edge. Particularly he picked up art theory, and techniques from Arshille Gorky, a brilliant abstract painter and autodidact, and many others, such as the extravagant John Graham. If I went into detail, this would turn into a list of famous artists, like Jackson Pollock: read the book, OK?

Returning, now to his restlessness and inability to settle down. His life was filled with paradox and disruption that seems to have been prepared by his early years. His mother was physically abusive; he loved her but disliked her. His early family life was unstable. In a strange way, he seems to have been prepared to react with both anxiety and comfort in unsettled situations, and to seek them out because of their familiarity. For a long period of apprenticeship, he labored over, and endlessly reworked paintings, and continuously brought new and difficult complications into his work that were, by their very nature impossible to take to a single resolution. He developed an underground reputation as an academically trained and skilled painter, who could draw like Ingres, but chose not to, who worked incessantly on strange paintings, but who could never finish anything.

Psychologically, de Kooning was a bundle on anxiety. He gradually learned to turn this irresolution into a kind of aesthetic, where he would bring several different things into a painting, let them fight it out, and consider a painting done when it had in his terms a "visage": a kind of theme of fragile dynamic balance. The hallmark of all his multiple styles is the ambiguity of figure and ground; the "background" will suddenly pop forward and the "foreground" recede, so that multiple paintings are embedded in one, in a disquieting and unrelenting energy. I am consciously not going to go into details about each of his several or so major styles; this review is long enough, and the book comes with adequate color illustrations, and there is plenty of material in the literature on them.

In his work he tended to build up anxiety, which would then explode into a manic burst of activity, often in a totally new style. (Many people only know, and dislike (or like) de Kooning on the basis of one style, he had seven or eight.) Then he would fall into anxiety again.

The remarkable thing I learned about the Abstract Expressionist era is that the really severe drinking of many of the artists, really came to a head, after these absolutely obscure artists began to be recognized. Partly, because with some money floating around they could afford Scotch instead of beer, partly perhaps, because there was fear of success, and partly because the Zeitgeist of the atomic era was seeking an art of anxiety, and so many of the artists that became famous at that time suffered from anxiety. (To cite just one example, Jackson Pollock, was if anything even more anxious and less mentally stable than most, and famously and tragically met his end in a booze fueled car crash.)

De Kooning was no exception. He soon feel into a cyclic pattern of alternating his periods of manic creativity alternating with manic binge drinking. For the most part, the first part of the cycle, de Kooning was alert, witty charismatic, and would pretty much go without sleep for three or four days, then he would fall into a stupor, and finally black out on the street, in an alleyway, or in a park, and his many friends would have to organize a search to locate and rescue him.

In his life he would never resolve anything. He lived alternately with his wife, the mother of his child, Joan Ward, and several different girlfiends. In this particular aspect you can see a commonality between his art and his life. He was not consciously cruel in in this bohemian life style, just rather helpless to live any other way. His daughter Lisa said that he was definitely not a good father, but she was just as equally certain that he loved her very much. At this point he had become enormously successful but was a very troubled man and deeply sunk in alcoholism. His wife, Elaine de Kooning, an artist with a significant reputation in her own right, came to have more of an influence in his life again after a number of years. She was a heavy drinker too and started to try to get fellow artists to go on the wagon after she joined AA. She set a project to get de Kooning dried up, and reorganize his life. As a result, he was able to have a very long and productive life. His art started to take on a light, fluid pastoral quality, more influenced by Matisse and impressionism, less edgy, and more graceful. But not so fast. It was a sad ending.

After a number of years, when he reached old age, he began to suffer significant memory lapses. He had significant cognitive reserves visually; it was said if he couldn't remember someone's name it would come to him when he drew them. Ultimately the diagnosis was Alzheimer's. He continued to paint for a number of years; Elaine organized the studio so that all his equipment and paints would be set out for him, and all his legal and routine affairs would be arranged. There is general consensus that this studio routine kept off the onset of dementia for a number of years as his mind was actively engaged. There is also somewhat of a critical consensus, that although not as edgy and anxious as his earlier work, his better late "ribbon paintings" take on a beautiful elegance and compression, and do indicate an artist at the top of his craft. 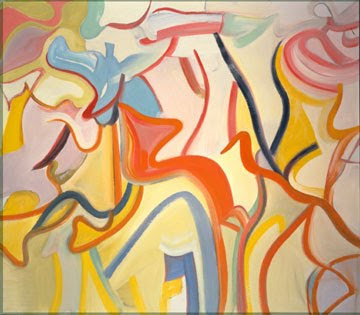 View all my reviews
Posted by Ed Smiley at 2:15 PM