A quite interesting biography.

Park, if you are not familiar with him, went in a diametrically opposite direction to prevailing critical and artistic consensus, to follow his own instincts, by leaving behind abstraction in the heyday of Abstract Expressionism and choosing to work in a figurative style. Park was marked by a kind of integrity that would not allow him to be anyone else but himself. His approach to figuration brought in a highly raw, expressive and painterly approach, which bears the mark of his earlier abstract manner. Initially this was deeply shocking to his friends and fellow painters, Elmer Bischoff and Richard Diebenkorn. Soon, they too began to work in an abstract expressive figurative manner emphasizing a contemporary California subject matter, a style or tendency that is often described as "San Francisco Bay Area Figurative". Not truly traditional, it incorporated many aspects of Abstract Expressionism, as well as the early modernism of the Fauves and Expressionists.

He died tragically at a very early age, of lung cancer, almost certainly attributable to chain smoking, and probably exacerbated while painting by contaminating his cigarettes with lead white pigment from his hands.

Both Bischoff and Diebenkorn returned to abstraction later in life, the latter becoming famous for the hundred odd paintings of the monumental "Ocean Park" series. David Park was not allowed to have the time to either accept or reject or explore.

Incidentally, I heard Nancy Boas speak (she signed my copy). In the audience, we actually had David Park's daughter who spoke a lot about her father with great affection, admiration, and respect. We also had a student of his.

View all my reviews
Posted by Ed Smiley at 7:16 PM No comments: Links to this post

This piece fought me a lot because I brought in so many cross currents and had to integrate with the extremely strong central zippy diagonal.  I transferred acrylic skins cut into different shapes, I used masking, and of course tons of acrylic transfer, primarily forming pulses perpendicular to the big diagonal.  I shifted areas to different degrees of warmth by with galzes, primarily with Indian yellow hue (Golden's for a yellowish, and M. Graham's for an orangish cast).

This is as close as I could get to reproducing the color: 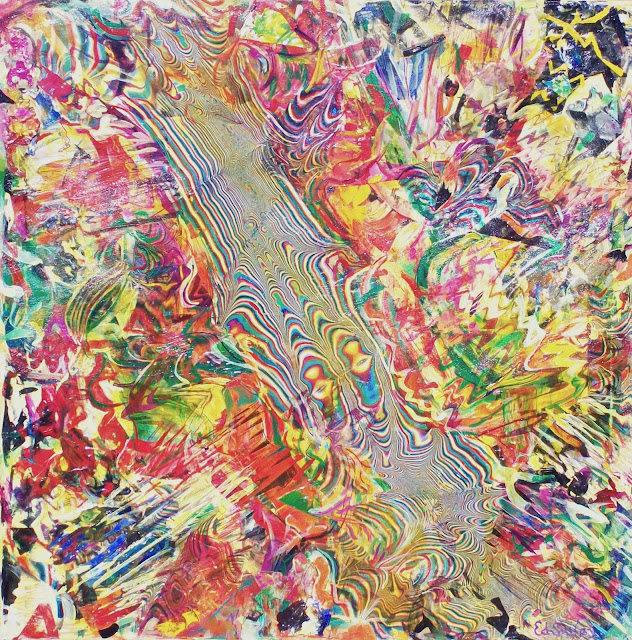 Posted by Ed Smiley at 7:07 PM No comments: Links to this post