Here's a couple of pieces I will have in the show:

Here's some other pieces that will be in the show:


Here's an older state of this painting, when I "finished" it a year ago. 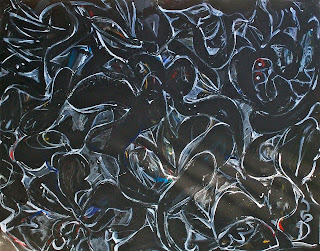 The Art Loft has a show exploring "Local Scenes", and the Blitzer Gallery has 6 artists from Monterey Peninsula with sculpture, painting, mixed media and printmaking exploring abstraction.

Also saw the Susanna Arias show at the MAH on the members reception a few days before, that's really great.

Susana Arias: Santa Cruz County Artist of the Year: July 19 – September 22, 2013
Also the Mary Karlton show at the Octagon is a lot of fun.
Posted by Ed Smiley at 10:59 AM No comments:

The Golden Age of Abstraction: Right Now | ARTnews: "It’s tempting to see the years 1912–25 and 1947–70 as the two golden ages of abstract art, and to feel that the present revival of abstraction is no more than a silver age. But the present is always deceptive: it was not evident to their contemporaries that Malevich, Mondrian, and Pollock were the towering giants they seem to us in retrospect. The fact is, there is a vast amount of good abstract art being made today, and the best of it is every bit as good as the best abstract art of the past. The golden age of abstraction is right now."

Francis Bacon and the Tradition of Art: Review

Francis Bacon and the Tradition of Art by Barbara Steffen
My rating: 3 of 5 stars

Great information on Bacon's art practice, and in general on the dialog between artists of the present and past.
Not a great deal of organization of the material; the presentation seems a bit jumbled, like Bacon's studio.

View all my reviews
Posted by Ed Smiley at 11:07 PM No comments:

Jackson Pollock: An American Saga by Gregory White Smith
My rating: 4 of 5 stars

This is a very good and well-researched biography of an extraordinary man and artist.

Pollock was notorious for reticence in expressing himself in words, other than short cryptic utterances, because they never seemed to say the full truth, although he could talk clearly and simply about art when he was comfortable with doing so. He was a man in a great deal of pain, and experienced the world in ways that cut him off from others; the authors suggest that he saw the world in a flashing ever-changing and somewhat threatening yet beautiful flux that was better suited to express in his use of fluid paint than in more traditional media. He was also a classic artist maudit, alcoholic, trouble maker, given to immense rages, and strangely sweet and charismatic moods, insecure about his masculinity, strangely boyish in his immaturity.

The problem with artist biographies is that there is a tendency to "explain" every aspect of their art in one to one correspondence to specific features of their life, when in a sense you are more interested in the struggle to create the art itself (or at least I am). One is more interested in the food at a fine restaurant that the state of the kitchen (I've been there, you don't want to know.) This is the aspect of Pollock that I most valued in the book; being human the obviously sensational train wreck of his life story was also of great interest, of course. Pollock's development was anything but smooth, and he gave little obvious indications of "talent" in his early work; his teacher, Benton, however, sensed in him, something deeper than facile skill, a hunger that would drive him to do extraordinary and tremendously innovative work

The authors seem to have engaged in a degree of heavy psychological archaeology to reconstruct private portions of his life, that when examining the footnotes seem a bit thin to say the least, and based on hearsay. Admittedly, given that reticence to justify and explain it is an overwhelming temptation--the polar opposite of the problem of their other subject, van Gogh, who was so verbose and eager to justify and explain that they were forced into endless cycles of fact checking. This is probably the chief criticism that I would level against the book.

View all my reviews
Posted by Ed Smiley at 10:32 PM No comments: